During the CTD conference we heard researchers presenting on hashtags (Jean Eric Bitang), Blogging (Fiona Dragstra), Facebook (Djimet Seli), etc. Panel 4 was intended to reflect together on what it means not to be connected, or not to participate in the online community. How can we as researchers understand and keep an eye to those who keep silent on social media either by choice, by force or for reasons somewhere in-between these two extremes?
To arrive at an understanding of the link between duress and digital silence, the papers in this panel first established either the link between duress and silence or between silence and the digital. Bringing all three concepts together would have been achieved in the fourth contribution to this panel by Marielle Debos that unfortunately had to be cancelled.
The papers in this panel were really thought-provoking. We started off with Kathrin Heitz-Tokpa on Performing speech and silence in rebel-held Cote d’ Ivoire. The nature of the relationship between silence and duress (duress can be explained here as violent rebel occupation severely restricting people’s ability to act) was under investigation in this paper. By presenting different case studies Kathrin discussed who could speak and who kept silence in various difficult situations and the consequences this had for different people. Gender, age, and location, for example, seemed to play an important role. What was very clear in Kathrin’s paper was that silence, even under duress, is not a single thing. Silence is not just a sign of oppression or a sign of fear. Silence at the right time can save lives and can solicit respect for example.
Inge Butter’s contribution made us reflect on our methodologies. How can we ‘read’ silences as a sign of duress and not overlook them in our analysis of duress? What are the ‘silences’ in our data collection methods and how can we become more aware of them? And what is the relation between more mundane experiences of duress (silenced by our informants, perhaps because they have become routinized) and those that come about through violent conflict, forced displacement and loss of cattle for nomads fleeing the Central African Republic?
While both papers do not make reference to ‘silences in the digital world’ we can clearly draw lessons from these papers about some of the potential foundations of silence and duress to formulate questions for further research that includes the ethnographic analysis of social media networks, youtube, hashtags…
Christian Kitenge wa Kitenge presented a paper on the difficulty of connecting that people face in south-east Congo. His paper was entitled: ‘A mobile phone without a phone network? Silences, connections and infrastructural duress in south-east Congo.’ One of his case studies showed how distrust would develop when the provider (intermediary) of mobile money services sent money away but when the sender could not reach the receiver by phone, accusing the sender of a failed transaction. This way technology that fails to function has unexpected social effects, this partly explains while people in south-east Congo make great efforts to be connected, such as travelling and climbing trees in order to be able to reach their clients and families.
While Kathrin showed us that in some cases silence can be empowering, this did not seem to be the case in Christian’s paper. It was quite remarkable furthermore that in this panel a focus on women was prominent, especially compared to other panels and papers during the CTD conference.
We had the honour to have as a last contribution to the panel a reflection by the comedian Nana Ardo from Cameroon, a special artist-invitee to the conference. He enlightened us on what the interaction of silence and duress might be about for the civil servant with a limited salary in Cameroon or for the married couple in difficulty. Even though the contribution was hilarious, it contained some rich reflections that actually added to one of the aims of this panel: understanding the meanings of silence under duress.

Report by Jonna Both 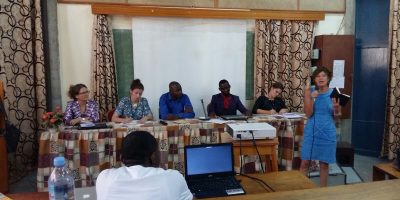 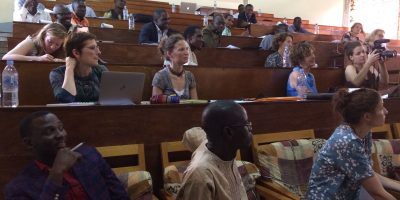 Silence can have many reasons and forms. Apart from the political, psychological or even infrastructural explanations, silence can also have many diverging cultural meanings that deserve exploration. In this panel we will reflect on two themes in relation to Silence: (1) what does silence mean in relation to the experience of duress? and/or (2) what does silence mean in a digitally (dis)connected Middle Africa?

People who have undergone traumatic experiences may be unable to tell of the ordeals they went through. When traumatic experiences pile up during one’s lifetime this can become even more complicated. Others chose to remain silent out of the experience of not being heard anyway, or for not wanting to hurt others by speaking about a shared fate when every day is a collective attempt to escape that same fate.

From a more political perspective silence has often been equated with subordination and is seen as a manifestation of oppression whereas emancipatory politics all over the world have been occupied with a reclamation of the right to speech (Connerton 2011: 52). In our (dis)connected world social media increasingly allow a plurality of voices to be heard. At least, in theory, and where those voices are not rendered silent by interventions of authoritarian states or companies curbing the potential of people to connect. In this panel we would therefore like to cast a reflexive eye, returning to the silences these social media reinvigorate in our contemporary world or the new silences they create. Who are the people in our research region who are not active on social media platforms? Does this mean they are silent or silenced (note the difference in agency, where silence can be seen as chosen, and being silenced as a form of coercion, ibid.: 70)? If they are purposefully silent, what motivates them? Can silence be empowering? How do communication infrastructures, oppressive regimes and Facebook policies contribute to silencing? Are there also other (cultural) factors which play a role such as social hierarchies and gender? And finally, for those people that are very vocal on social media: what are the silences in their speech? Which are the topics they are unable or unwilling to touch upon, despite their audibility? Within the context of our research region we are curious to explore this intersection of duress, silence and digital connectedness.

Between 2002 and 2011, the northern half of the Côte d’Ivoire was controlled by the rebel group Les Forces Nouvelles. The rebels’ presence weighed heavily on everyday social life. In this paper, I will analyse how particularly women used speech and silence to address situations of duress, oppression and hardship.

A market woman, Aunty, sold rice and sauce on the market. One day, four rebels demanded to be served. Aunty served them rice with sauce and some meat. But then, they left without paying. During the following days, they came back again and again – sometimes demanding extra portions of meat. Each time they left without paying. Aunty did not say anything and served them well. Other women at the market told her to ask the rebels for money next time. But Aunty’s husband was an active supporter of the President and therefore risked being punished by the rebels for minor things. Hence, Aunty preferred to remain silent. There are many ways of being silent, though. She could have served the food reluctantly, putting only a little bit on their plates or giving them an evil look. Such practices of resistance are common and have been described as weapons of the weak. Aunty, however, chose to fill their plates generously with sauce and meat, thereby displaying ownership, hospitality and motherhood. After about three weeks of eating without paying, the rebels said to Aunty: ‘La vieille, we have been provoking you for so long, but you haven’t said anything. You have always given us food to eat. You’re a good person.’ From that day, they paid her.

Silence and compliance have often been equated with continued oppression. In this case, however, silence was golden and had its proverbial emancipatory effect. Social status of age, gender and wealth shaped who could speak without harm in what kind of situation during the violent political crisis. I will describe situations where speech had damaging consequences, where only women could speak and where silence and compliance had transforming outcomes. At an analytical level, I will argue that speech and silence need to be analysed as performative acts and take audiences into account.

A mobile phone without a phone network? ‘Silences’ and connections under the duress of infrastructural issues in south-west Congo.

This communication looks into the relation between silences, difficulties, and connectivity based on the ethnographical materials collected in the city of Lubumbashi in south-east Congo. The huge success of mobile phones in Congo over the past fifteen years is due to the fact the country has experienced a general degradation of its main communication and telecommunication infrastructures as a result of a deep economic and political crisis. Indeed, mobile phones have allowed again connection and communication between people who used to have huge difficulties to communicate because of the decline of the landlines, and to travel because of the degradation of communication infrastructures. Yet our data highlight a paradox in the operability of mobile phones in Congo. Infrastructural issues, in particular the lack of cellular transmission towers are limiting connection over space. It excludes from interconnection many neighborhoods, villages and some areas, making the conditions of connection very difficult, if not impossible, including access to social networks and the use of mobile phone services such as mobile financial services.

We will illustrate our case with examples collected during our survey on the difficulties of connecting people in the city of Lubumbashi with those living in more or less remote areas that engender «silences» between people, despite their eagerness to connect and communicate. These examples show that in some areas, the lack or remote location of cellular transmission towers or the particularities of the topography are causing the network connection indicators on the screen of mobile phones to fade progressively to the point of disappearing completely. Sometimes, to access the phone network, one must be ready to do abnormal things, such as climbing on a hilltop or a tree… As a result, people often find themselves with mobile phones without any possibility of connection to the phone network, in other words in a situation of involuntary ‘silences’. We appear to be confronted here with the issue of ‘connectivity under duress’, an issue that we would like to review, and over which we would like to start a reflection.

Questioning the importance of the more ‘mundane’ forms of duress: A methodological reflection on the role of ‘silences’

Our research material (data) is informed by the informants and co-creators we work with as much as it is by us as researchers. Certain data is not collected, either overlooked, not spoken about or chosen not to be recorded. There are of course also boundaries to what data we collect, set by conceptual and methodological frameworks. Within the scope of ethnography, how does one research ‘duress’ in such a way that it surfaces on its own and without being too intrusive, without questioning everything and causing painful memories to be relived? Can such an approach – one which chooses to describe the daily life around moments of crisis and duress – help us to understand ‘duress’ itself?

Nana Ardo at the CTD conference from Connecting in Times of Duress on Vimeo.